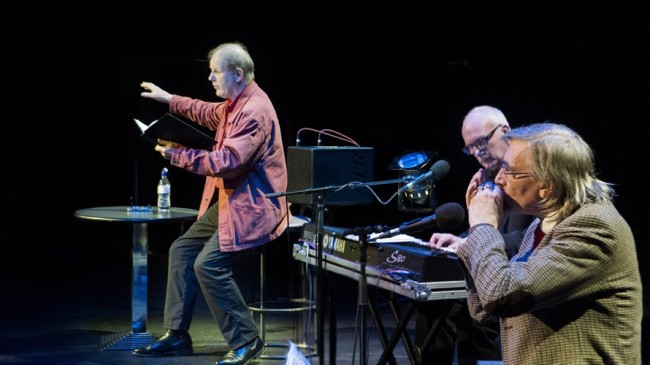 As part of the weekend’s World War I remembrance ceremonies, a War Horse concert, featuring music from the play and readings from Michael Morpurgo’s original novel, took place on Friday at the Birmingham Hippodrome.

Timed to fall just before Remembrance Sunday, the striking contrast between Only Remembered and the rather grander, televised war memorials to which we have grown accustomed could not have been more striking. With just three people on stage – musicians John Tams and Barry Coope, as well as Michael Morpurgo himself – the concert had a close and intimate feel, magnifying its emotive power and resonance with each person present. Stripped of the pomp and glory that often obscures bigger ceremonies, it strove instead to paint a more honest and brutal picture of the horror and the pity of war.

Despite having seen the War Horse play very recently, I found John Tams’ music seemed even richer and more beautiful in this context, which allowed listeners to focus on each of the songs more directly. More direct, too, was Michael Morpurgo’s storytelling, which held people’s attention without any kind of visual aid. It was amazing to see whole groups of schoolchildren hanging on his words, more enthralled than adult members of the audience. Their attention never flagged, either, despite the fact that the concert ran through the full story without an interval.

One thing that struck me as I watched the three men on stage was that Michael Morpurgo, unlike the musicians, had chosen not to wear a poppy. I found this particularly interesting after hearing him speak on Radio 4’s Moral Maze last week, where guests debated the poppy, its significance and possible overuse. During the programme, Michael Morpurgo expressed concerns that,

“if we’re not very careful….we focus too much on the poppy and not on the stories of what happened, the history of what happened. That seems to me to be much more important than what poppy you wear or whether you wear a poppy.”

Only Remembered is amongst the most moving and thought-provoking war memorials I have seen or heard, encapsulating the futility of fighting and highlighting the loss on all sides. It served to remind its audience of what is now, sadly, too often forgotten, lost amongst patriotism, perceived heroism and endlessly repeating arguments for contemporary wars: that the true purpose of remembrance  should be to ensure that such terrible things never happen again.